I’ve just surfaced in Berlin and my jet lag-addled mind is pleased to see my latest paper, co-authored with my Flinders University colleagues, John Long and Brian Choo, published today in the Earth and Environmental Science Transactions of The Royal Society of Edinburgh (now that’s a mouthful!).

The paper is entitled “New Insights into the origins and radiation of the mid-Palaeozoic Gondwanan stem tetrapods.” In it, we provide new detail about Koharalepis, a fish from the Middle Devonian Aztec Siltstone of Antarctica, using 3D synchrotron data. We also propose some alternate biogeographical and phylogenetic models of stem tetrapod origins and radiations with a distinctly Gondwanan perspective (remembering that Gondwana was the great southern supercontinent that Australia and Antarctica were once a part of).

The paper forms part of a special volume written in honour of Prof. Jenny Clack, who has been seminal in studies of the “fish-tetrapod” transition, and who wrote the absolutely wonderful Gaining Ground: the Origin and Early Evolution of Tetrapods. It has been an absolute honour to get to meet Jenny at various conferences over the last decade, and her impact to the field of early vertebrate evolution shall never be forgotten.

I was honoured to be asked to speak to the Adelaide Planetarium “Supernovas” this week. The “Supernovas” are astronomy students who meet at the planetarium to keep their knowledge of celestial objects up-to-date, with lectures by invited speakers from other disciplines each month.

My talk was entitled “Fish, Fossils and Brains” and I got to speak about my favourite avenue of research, palaeoneurology. Palaeoneurology is the science of fossil brains and neurobiological evolution. The discipline was founded by Tilly Edinger in the 1920s when she described the natural endocast (mould of the internal cavity of the skull) of the Mesozoic marine reptile, Nothosaurus. Prior to Tilly’s work, scientists only compared the brains of living animals without any input from the geological record.

I’m most interested in the changes that occurred across the fish-tetrapod transition. The “lobe-fins” (Sarcopterygians) comprise nearly half of all vertebrate species, and unravelling the major innovations that occurred in the brains of the first tetrapods (the earliest terrestrial vertebrates) is pivotal for understanding our very own neural evolution.

It was especially cool to be treated to a show inside the planetarium after my talk. Many thanks to Paul Curnow (in the photo below) for the invitation and to the “Supernovas” for their interesting and thought-provoking questions. 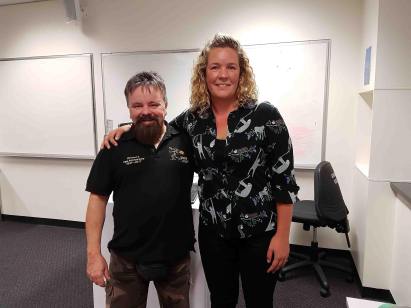 Tonight I’ll be appearing as a panellist for Science Says! – an event put on by The Science Nation and held at the Royal Institution of Australia (RiAus) Science Exchange, Adelaide.

The night will be hosted by Dr Joel Gilmore, and is described as “an evening in the style of the great panel shows – think … Mock the Week, Spicks and Specks, and just a dash of QI.”

“Competing in Adelaide for all the glory science has to offer is:

It kicks off at 4pm, and tickets are just $15 at the door. Hope to see you there!
Please find the full event details on the Facebook page.

A big “CONGRATULATIONS” to my Honours student, Phoebe McInerney, who today had her final seminar and viva. Honours in the sciences is a rigorous year-long (only 9 months, really) independent research project which usually results in the production of a thesis.

Her project was a pretty epic combination of traditional anatomical description, modern scanning methods (diceCT and 3D segmentation) and cladistic analyses, all in the pursuit of resolving Palaeognath evolutionary relationships.

Palaeognaths represent just ~1% of all living birds and includes the large, flightless forms such as ostriches, emus, rheas and the kiwi, and the flighted tinamous. This group also includes extinct forms such as the moa and elephant bird.

The large and flightless birds all share features related to their lifestyle such as reduced wings and strong legs that have likely arisen as a result of “convergent evolution” (called a homoplasy) which can make reconstruction of the evolutionary family tree very difficult.

Instead, Phoebe looked at the syrinx, hyoid and larynx (the vocal organ and its connected parts) in these birds to find characters that would reflect the true evolutionary history of the group.

I co-supervised Phoebe along with the Bird Man himself, Trevor Worthy, and phylogenetic analysis guru, Mike Lee. I’m very happy to have been involved and have great hope for Phoebe’s future academic career. CONGRATS PHOEBE, AWESOME JOB!

Alice, Phoebe and Trevor at the recent FUPS 30th celebrations.