This week I was in Paris to attend the fifth International Palaeontological Congress (IPC5). This is a fantastic meeting that draws together vertebrate palaeontologists like myself (those who work on animals with a backbone), as well as other palaeontologists who work on invertebrates, fossil trackways, plants and others who study the rocks in which the fossils are found. There were close to 1000 attendees from over 60 countries! I attended the previous two IPC meetings (London in 2010, Mendoza in 2014) and it always proves to be a very exciting and informative week, and Paris was no exception. It was particularly apt that this event be held in Paris, as France is often considered the birthplace of palaeontology, thanks to Georges Cuvier (1769-1832), a french naturalist and zoologist known as the “founding father of palaeontology”. While Cuvier developed palaeontology into a scientific discipline and demonstrated extinction to be a fact, it was his successor at the Natural History Museum (Henri-Marie Ducrotay de Blainville) that first used the term “palaeontology”. Another french naturalist, Jean-Baptiste Lamarck, was a biologist who founded the field of invertebrate palaeontology and made major contributions to evolutionary theory and our understanding of biostratigraphy.

I gave my presentation on Monday, describing a new coelacanth fossil from the Gogo Formation of Australia. The talks continued all week, and with 11 concurrent sessions you were never short of something to spark your curiosity. Tuesday evening we were treated to a “cocktail dînatoire” inside the Great Gallery of Evolution (fantastic!), and were given the opportunity to visit “Trix”, a complete Tyrannosaurus skeleton currently on display. On Wednesday I attended a Scientific Illustration workshop inside my favourite museum in the world, the Gallery of Comparative Anatomy and Palaeontology. On Thursday evening, we cruised along the Seine River and enjoyed views of the Eiffel Tower and other Parisian icons during the Gala Dinner, and Friday was chock full of wonderful fish talks! 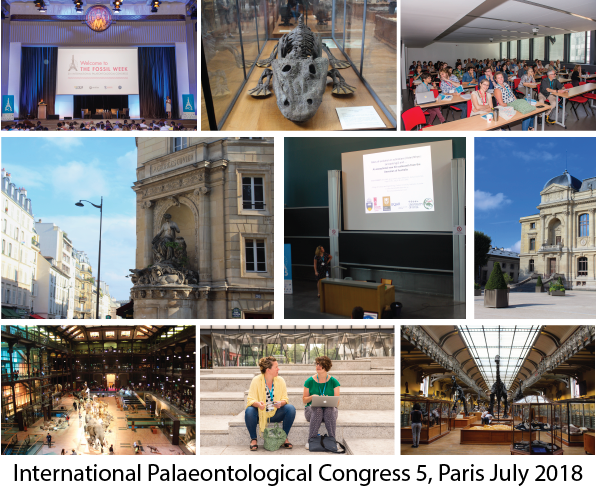 And finally, there was a special session in honour of Phillipe Janvier, who currently works at the Museum National de l’Histoire Naturelle (MNHN), and who has made an incredibly impressive contribution to palaeontology, specifically the study of Palaeozoic vertebrates, such as those that I study. His 1996 book “Early Vertebrates” remains a seminal work in the field, not unlike a bible for fossil fish workers!

View all posts by DrAliceClement